Next stop on the Oslo Burger Hunt is Burger Joint :)

The next stop on our Oslo burger hunt was Burger Joint in Aker Brygge.  Aker Brygge is a neighborhood in Oslo on Oslofjorden and has a reputation for fancy shops and upscale restaurants.  Aker Brygge used to be shipyard for Oslo until the early 80s.  Since then, it has updated and become a bustling, popular neighborhood of Oslo.

Burger Joint is tucked away on a side street amongst other shops and bars.  The street features a lot of brick and has both an industrial and upscale feel.  For this visit, I ordered the Black and Blue burger with bacon.  I feel like blue cheese and bacon is always been a happy marriage together. Interestingly, in Oslo, I have found that a lot of “blue cheese” burgers actually are served with blue cheese dressing, rather than just the cheese.  Lucky for me, Burger Bar uses the cheese on their burgers. 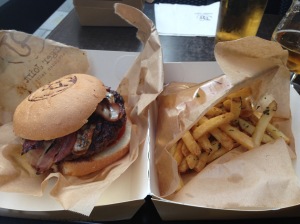 The burger was really delicious.  I could taste the toppings as they were substantial.  The burger was well cooked (with a bit of pink in the middle). Also, the patty itself had a nice char to it.   I also ordered the rosemary fries which were tasty.  As a whole, this is the best burger that I have had so far with our burger hunt.  And as an added bonus – you can take a nice walk along the water afterwards so you can feel a bit less guilty about devouring every bite of your burger!

Next on the burger hunt?  Illegal Burger 🙂